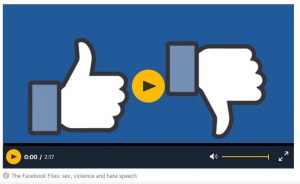 Facebook’s secret rules and guidelines for deciding what its 2 billion users can post on the site are revealed for the first time in a Guardian investigation that will fuel the global debate about the role and ethics of the social media giant.

The Guardian has seen more than 100 internal training manuals, spreadsheets and flowcharts that give unprecedented insight into the blueprints Facebook has used to moderate issues such as violence, hate speech, terrorism, pornography, racism and self-harm.